She who seeks shall find....

Hiding things in books is a great idea if you don't need to find them again, or if you at least write down which book you have used. As I have a few thousand books here, it is sometimes rather difficult.... But then I found the right book, *Charles Darwin's Origin of the Species*, and there were the four leafed clovers. I don't know who pressed them or put them in there, but I was happy to have found them again.
My tag has been made from some scrap card, covered with part of a page from *Webster's Dictionary* - an extremely large and heavy volume. I chose the page where *clover* was. I distressed the paper with forest moss DI, and added an image transfer of a clover plant, before affixing the four leaved clovers and a ribbon, which I also found in the cutlery drawer(?!).

I also found the frontispiece from a very ancient book, which had been placed in Darwin's pages for safe keeping, by whom I do not know. But it really is a little treasure, from 1627, which makes it almost 400 years old - amazing! If you would like to copy it for your own use you are very welcome. 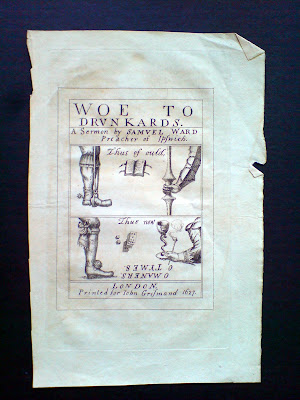 And this is another found piece, discovered at the Rhine some weeks back, a little stone which has a three cornered form and looks like an owl. Well, I think it does! 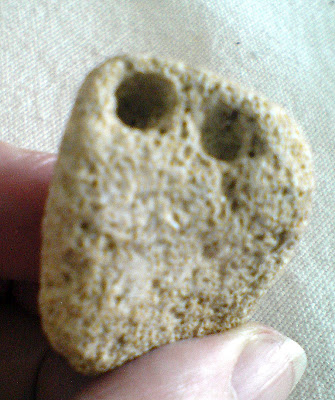 My journaling prompt for yesterday was *time*. I scanned two old documents I have to make the backgrounds for the pages, and faded them before printing. The verse I have used is one of my faves; it's part of Isaac Watt's hymn, *Oh God, our help in ages past*, a paraphrase of Psalm 90. The picture on the bottom of the left page shows the statue of Isaac Watts in Abney Park Cemetery in Stoke Newington, London. I included it because I like the way the greenery is growing up the plinth of his statue - time does not stand still, as King Canute - a Danish King who ruled in England, too, in the 11th century noticed - *Time and Tide wait for no man*.
Apart from that I have used some TH templates to sponge the clock and cog images, and added some image transfers, a bee and a butterfly, insects with wings - time flies. 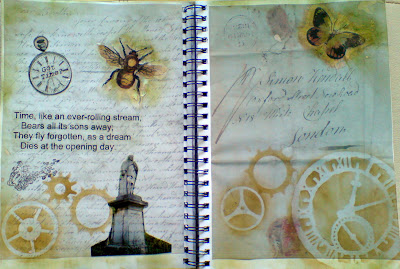 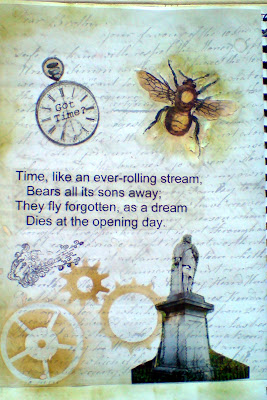 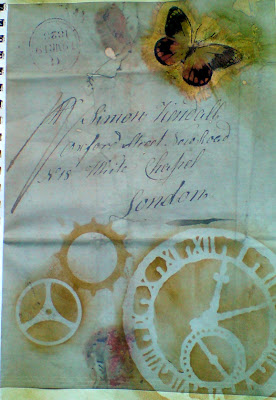 So, that was all for today. Have a good day you all, and thanks for visiting!
Posted by Valerie-Jael at 08:29