Hi you all, it's time for our weekly parties again. At Paint Party Friday, hosted as always by Kristin and Eva, it's week 7 of year 2, and Darcy's Postcard Challenge has reached week 18. Our participants are visiting New Zealand this week; well, that's the plan....
On the home front I am still struggling. I dug out some old summer spandex ballerina-shoes yesterday, which I just about managed to pull over my poor toe. They were just the thing for a shopping trip in the rain, but better than nothing. I felt rather like Cinderella's ugly sister trying to squash my foot inside the shoe! As I was concentrating on foot wear, I forgot that I was wearing my baggy old work-out trousers, colourfully splashed and smeared with paint, gesso and co. Getting down the stairs was much worse than coming back up, but I made it. I must have looked like a bag-lady, limping behind my shopping cart and trying to avoid the puddles. But at least I didn't see anyone I knew, and managed to get back home safely, with my shopping, and even got a parking space in front of the door - how's that for luck? And I'm happy to say that I didn't notice the toothpaste dribble on my tee-shirt till I was back home - good thing, it might have demoralised me completely! Today I woke up with a sticky eye, and seem to have an oozing stye on the lid of my left eye. But it evens things out - right foot, left eye - these things are sent to try us. And to be quite honest, I feel VERY tried just now!

But now to Cissie and Jason:

Cissie is happy to be back with Jason and Thelma after her trip to Norway. They all enjoy going out for their usual fish-and-chip dinners, which Cissie declares to be much healthier than the Norwegian fish, because in England they fry all the fat out of it....!!! Jason seems to have recovered from his *flight* to Romania, Cissie just notices that his eyes seem to be rather red lately, and he keeps saying he fancies a big, rare steak; something he never used to want. He has been looking forward to flying to New Zealand, and meeting up with Sandie, an old friend from his Australian days. But then Cissie notices that his neck looks all swollen, and he says he wants to go to bed early.
Hallo, Jason wants to go to bed early?
This can’t be good. Cissie tells him he should sleep on her sofa, gives him some pyjamas from her dear departed husband, and sends for the doctor.
Dr Murks arrives and examines Jason, while clucking his tongue and shaking the dandruff off his head. *He’s got mumps!* he then proclaims. *Mumps is very serious in adults. He could develop complications, he could even get impotent!* Jason pales further at this announcement, and is so shocked he fortunately doesn’t hear that Cissie tells Thelma that that wouldn’t be a bad thing with Jason! Dr Murks says he cannot fly to New Zealand, and that he needs bed rest and light nourishment, which Cissie promises to provide him with. Jason is very down, stays in bed, and lets Cissie take his temperature and fuss over him like a mother duck with withdrawal symptoms. He cheers up a bit when he gets a parcel from Sandie some days later, with a huge flag of New Zealand, some felt sheep and a Maori mask. Jason begs Cissie to stick the sheep onto the flag, and then has his photo taken in front of it to send to Sandie, although he is not happy that his neck looks so swollen and lumpy. He also has a photo taken of himself wearing the mask. Cissie says, *This mugshot is enough to frighten the pants of anybody! Don’t dare to show it in public, they might lock you up!

Poor Jason!He doesn't get to see the wonderful beaches, Milford Sound, the kiwis or the beautiful sheep, of which he is so fond.... 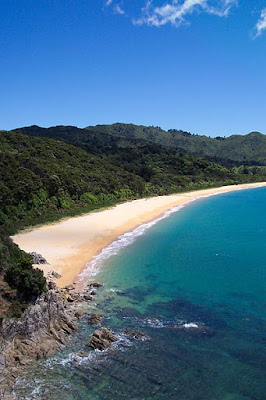 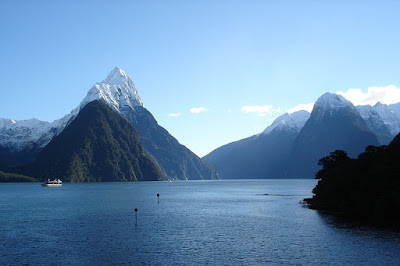 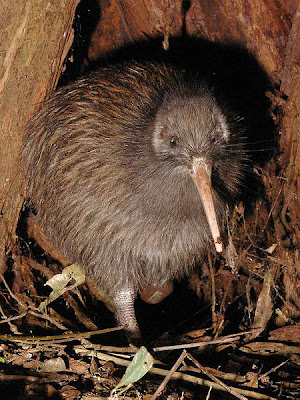 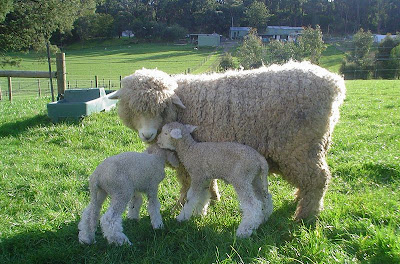 (Pictures by courtesy of Wikipedia Commons)

Here is the postcard he sends, not to Cissie, but to Sandie in New Zealand: 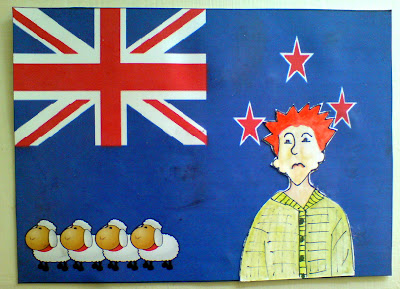 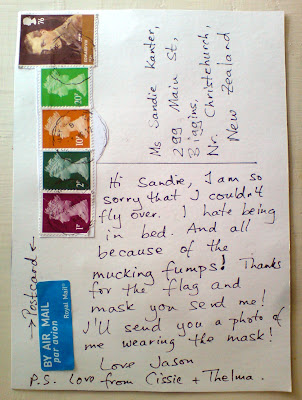 And here is Jason, hiding his mumps behind his precious Maori mask: 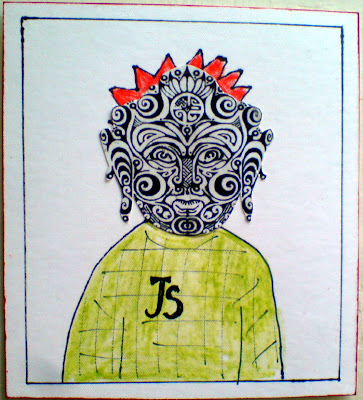 I sometimes think Cissie is a little harsh to the poor boy....


For Paint Party Friday I have re-purposed another canvas, once again using acrylics in purple and green shades. I have called it *Purple moon-walk*. The canvas is 15x15". I used my fave squares stencil and structure paste to do the background, before painting and adding Stickles, the moon and the umbrella men. The raised squares have been embossed with embossing powder and perfect pearls. 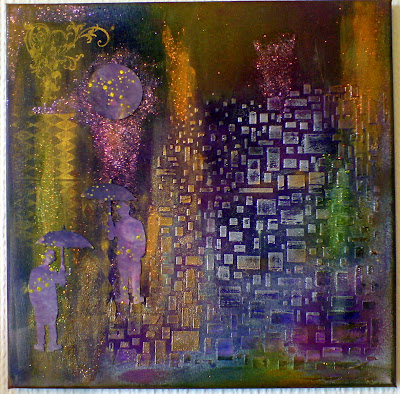 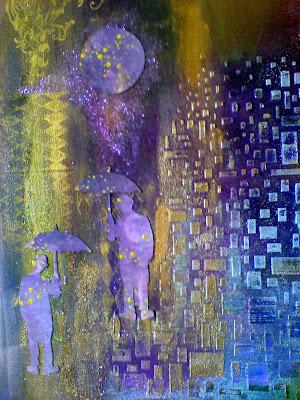 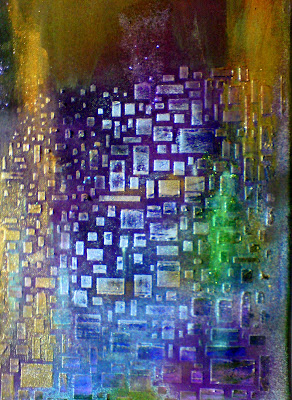 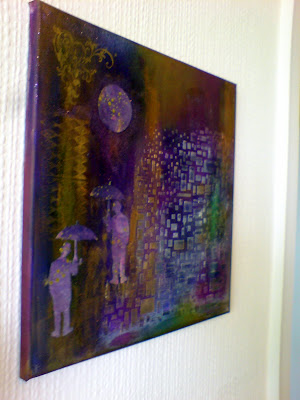 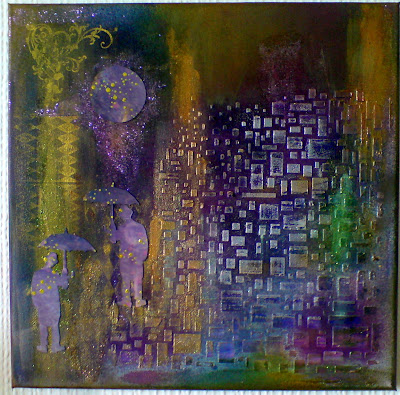 Congrats to all who struggled through to the end! Have a great day, take care of yourselves, and thanks for visiting!