PPF and Jason In Ghana

It's Friday again, so time for Paint Party Friday, hosted as always by Eva and Kristin, and Darcy's Postcard Challenge week 20, where our participants have to visit a west African country this week. Darcy, what about sending them somewhere normal, like Brighton or Blackpool or Berlin?? Anyway, Jason is off to Ghana....

After arriving back home from Bulgaria, Thelma was not really happy to see that Jason and Shannon had got so friendly. And although they both deny that there is more going on than just being friends, nobody believes them, least of all Thelma, who keeps a watchful eye on her beloved daughter.
They are still looking for a new flat and shop for Jason, but nothing that Thelma and Cissie find is right for him, and in the meantime, Shannon has taken to spending more and more time with Jason, ‘To help the boy in the shop....’
One afternoon, Jason, Shannon, Thelma and Cissie are enjoying their usual cream cake tea, swapping the newest news of hatches, matches and dispatches when Jason says, ‘I’ve got something to tell ya!’ Thelma thinks it might be something about Shannon, and nearly chokes on her tea, but is very relieved when Jason says that he is planning to go to visit an old school-friend, who is getting married. ‘Where does he live now?’ asks Cissie. ‘Well, 'e lives in Brixton, but 'e’s getting married in Accra, where ‘is parents came from. ‘E’s the one wiv the shop selling second hand jazz records, makes a fortune wiv ‘is old vinyl!’ says Jason. ‘Problem is, I ain’t got enough money to take Shannon, and she’s pretty cut up about it!’ ‘Where is Accra?’ both ladies ask simultaneously. ‘Isn’t it in South London somewhere?’ asks Cissie. Jason grins, and says, ‘Nah! It’s in Africa, in Ghana.’ Cissie and Thelma can’t stop shouting. ‘You must be mad!’ ‘I would never let my Shannon go there, there are pirates and terrorists everywhere!’ ‘Just send ‘em a nice present and be done with it!’ ‘Jason!’ please!’
But, as usual, Jason does not listen. Shannon is furious that her Mum won’t give her the money to go with him, and after tiring themselves out with eating cream-cakes and shouting at each other, they all go to the fish-and-chip shop for supper to recuperate. Sharon decides to knit Jason a pullover on her knitting-machine, and tells him he is not to take it off all the time he is there, except perhaps for the wedding, and he is not to look at any girls there. Cissie and Thelma are speechless. Then Thelma whispers to Cissie, ‘Bloody hell, I think they’re getting serious....’ And everybody in the shop starts to laugh.

After a long flight Jason arrives in Accra, and is surprised that it is a modern town, full of large buildings, noisy roads and crowded with people, in fact, not much different to London, as far as Jason can see. 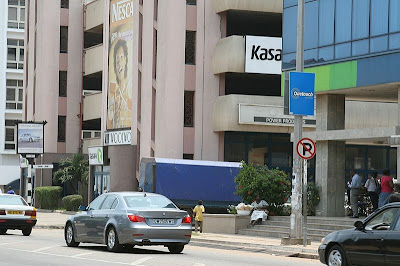 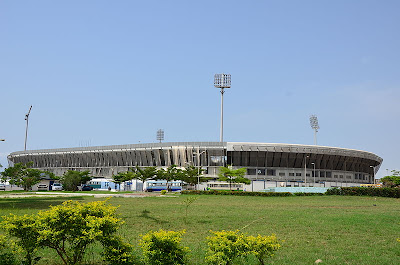 (The first two pictures show the town of Accra, the third one is the sport stadium there. All three photos are from Wikipedia Commons)

His mate’s family live outside the town in a big, modern bungalow, with air-conditioning and IKEA furniture. Jason can’t believe it. He had envisaged Africa to be rather different…. The wedding ceremony goes on for several days, with partying day and night, which Jason just loves. The family give Jason some African masks, statues and printed cotton material to take home for his family. 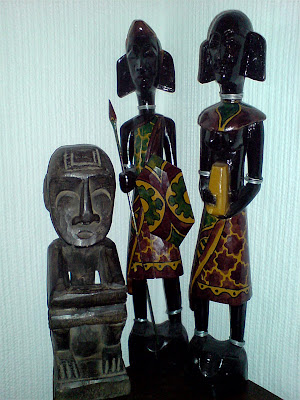 When Jason arrives back at Heathrow, Shannon is waiting for him, and he realises how pretty she is, and how much he has missed her....

This is the postcard he sends Cissie. He sends the same one to Shannon, but puts it in an envelope, seals it, and writes ‘Private and VERY confidential, Thelma keep out!’ on it. I wonder what he wrote on it? Thelma was NOT amused.... 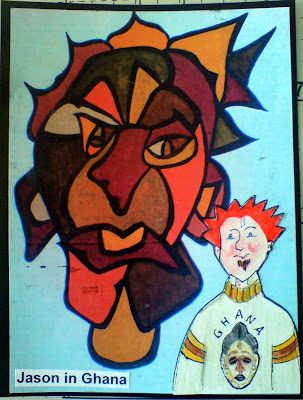 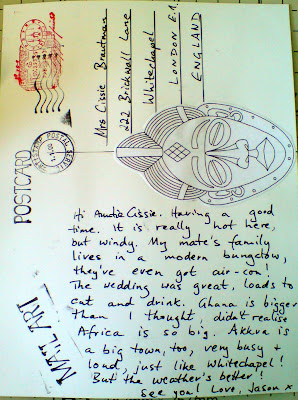 The postcard features a mask, painted with tempera colours more than 20 years back. Jason is wearing Shannon's new pullover, and has grown a little beard. He thinks it will distract from his still rather swollen face. And he still has those red marks on his throat....

For Paint Party Friday I have made a large, mixed-media canvas. I have painted it with acyrlics, using templates from crafter's work shop for the small squares, numbers and writing. It's something a bit different to usual, I think it's good to try something new once in a while.... 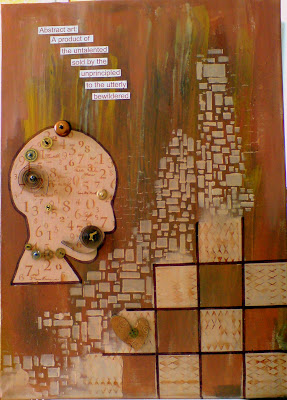 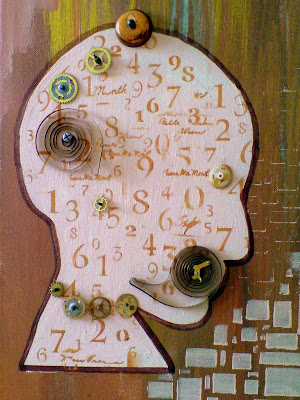 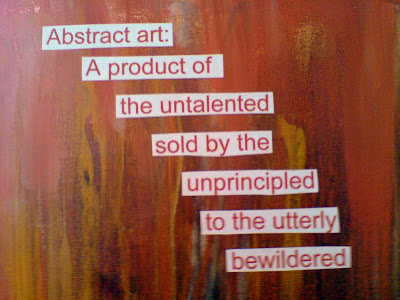 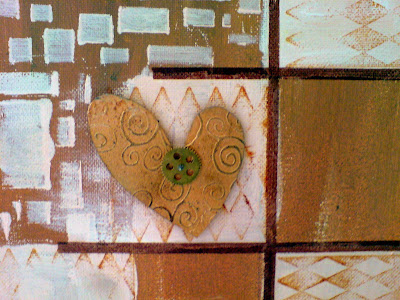 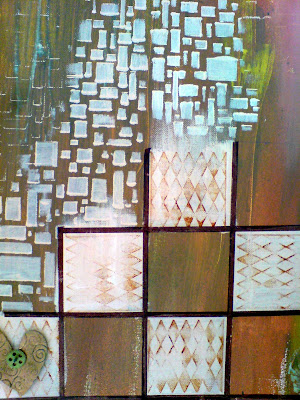 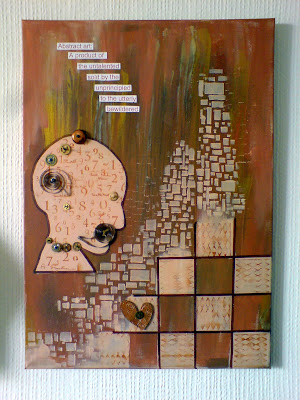 The quote is from Al Capp, rather thought provoking, but perhaps not to be taken quite seriously.

Here's wishing you all a good weekend, have fun, take care and thanks for looking!
Posted by Valerie-Jael at 10:26