Summer of Color and some cards for Less is More

Today it is time for *the Summer of Color* hosted by Kristin. This week our color is yellow, not usually a color I like too much, but I suppose you have to try everything! Yellow reminds me of the sixties, with all the accompanying social protests and demos against war, the bomb, against nearly everything, a lot of which I joined in at the time. It was the time of the Beatles with their *yellow submarine* and Donovan with *Mellow Yellow*, which I took as theme for my first painting. I used a mixture of tempera, acrylic and metallic paints, some of which I heated and bubbled to give texture. The background has been stamped with TH ink in wild honey using some bubble plastic as a stamp. I added some of the text of Donovan's son, gave the lady a feather in her hair, and lots of daisies, one of the symbols of the anti-war movement. And of course, the famous symbol for *ban the bomb* in the right hand corner. 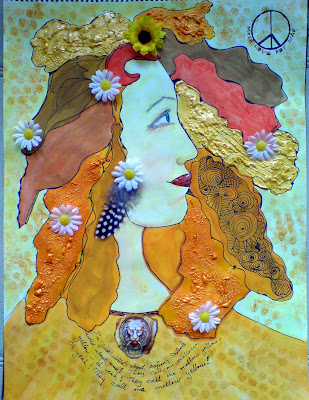 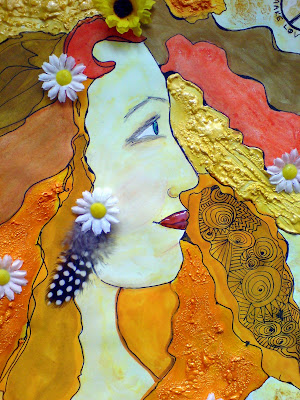 For the second picture I got a bit carried away with the sixties themes - psychedelic patterns in orange and yellow form the background, and in the middle is a *magic mushroom*, which unfortunately led many young people to bad dreams and worse caused by drug misuse. After painting the background with water soluble wax crayons, I drew different psychedelic patterns in black ink, and wrote the titles of a lot of the protest songs of the sixties, as well as some of the sayings of the time, like *Make love not war*. 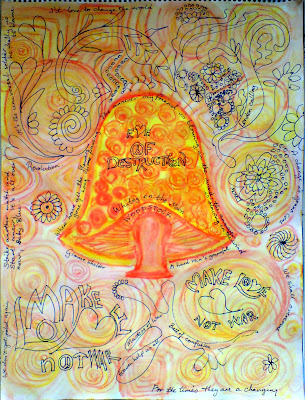 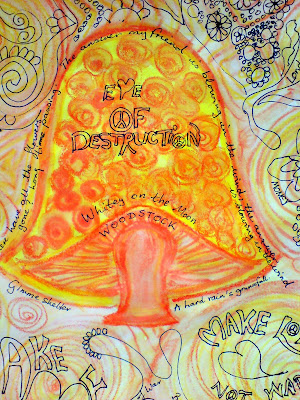 And I made two cards for the *Less is More* challenge. This time our stern task-mistresses want to see shades of blue. I distressed two narrow strips of card with TH inks in faded jeans, stormy skies, tumbled glass, broken china and chipped saphire, applying the colors diagonally, starting with the darkest. I left some tiny spaces of white here and there to give the impression of sky. I stamped the cards with motives of the Tower Bridge and the Houses of Parliament. I mounted the printed strips onto white cards. The birds have been drawn with black pen. The first card has only been stuck along the sides, so that the picture stands out from the card. 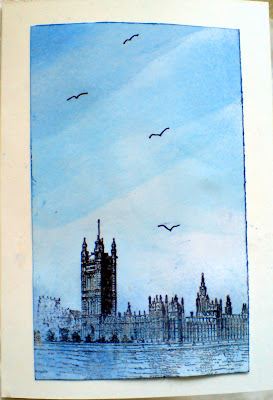 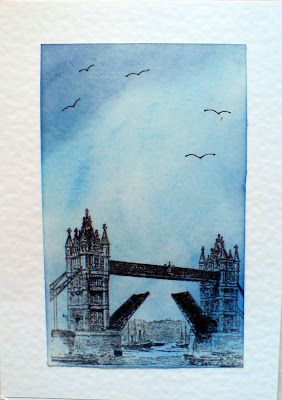 I think this should be enough for today. Have a great day you all, and a happy 4th of July to all my American friends. Take care, and thanks for visiting!
Posted by Valerie-Jael at 08:37