Well, another day has passed and gone, and another sunny but cold day is waiting for me. Yesterday I posted 2 parcels off to the USA, and had to brave the post-lady once more. 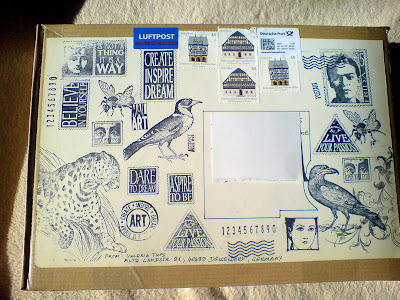 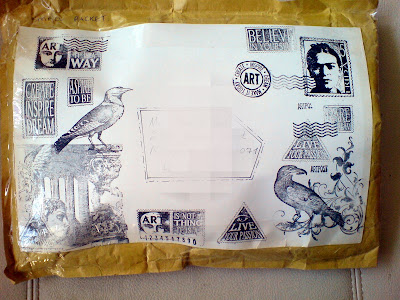 The post lady made her ususal speech. Bla, bla, bla and she can't understand why anyone would want to make or get anything like *that* as she thumped the stamps onto it. And she was extra annoyed because I asked her for some pretty stamps this time. She only had to put them on one package, because I had stamped the other one at home, but even that was evidently tooooooo much for her! I think I will try another post office next time, even if it does mean a longer journey - they can't all be that bad.
Anyway, I had a mail from Lenna of Lenna's creative swaps, who has received the mini books I sent to her, and she was delighted with her mail art package, and has put a photo of it on her daily photo journal, so that's something! http://www.blipfoto.com/view.php?id=1128177&month=5&year=2011
In one of the packages I sent was a mini book for a swap, pictures will follow in a few days. And in the other one was my *egg-swap* organised my Tee. I had to send to a lady in the south of the USA, and as I did not fancy making another egg, and Easter is over, I used half an egg to make an altered canvas. The lady I have to send my swap to has a blog called *The Cranky Queen*, so I took that as my prompt and made this: 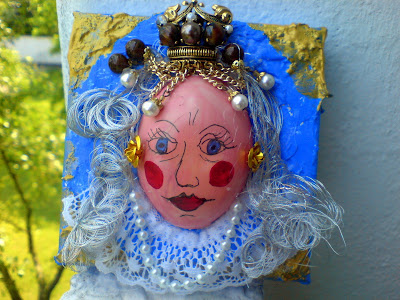 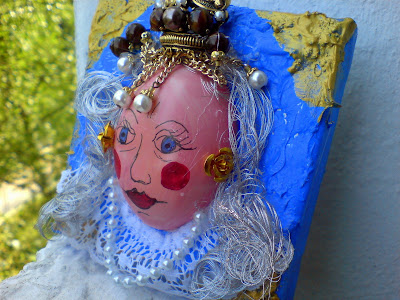 I hope she will like it, I had great fun making it. The egg has been stuck into some structure paste, with which I coated the 4x4" canvas. I painted it in royal blue, before doing the queen's make-up, using acrylic paints and felt-tips. Her hair has been made with fairy hair, used by florists - and by me - and her crown is an old brooch. Then she got some rose earrings, a lace collar and a pearl necklace, and her majesty was finished. I think I was still under the influence of the royal wedding! I really enjoyed making this, so hope that the Crank Queen will like it too. I have told her that I am blogging it today, so she has the choice to look now or wait and see it later as a surprise when it arrives.

And the rest of the day I spent playing about. I read on several blogs about friendly plastic, and especially Zoe made a lot of pretty things with it. So I ordered a little bag of pellets, and tried it out. They are easy to soften in hot water, and to start off I decided to try squashing it into a mould, which I did. The first few I made looked awful, but the good thing is, that you can throw it back into the pot to warm it again and start anew. At the end I had five more or less successful hearts. Two have been coloured with Inka gold in silver and gunmetal grey, 2 in gold and grey, and one in bronze and grey. I used the heat gun to glue a large glass pearl onto each of them, which can be used to thread a wire or ribbon through them. They will make lovely embellies for paper work, and can perhaps be used as pendants or key rings - I will continue playing! 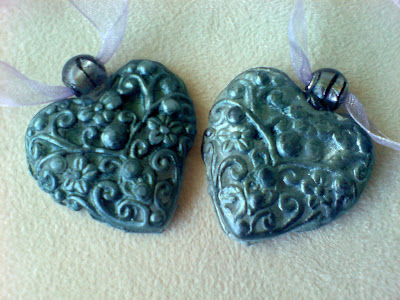 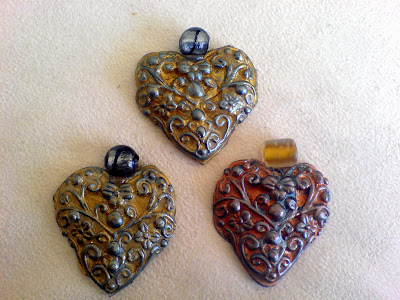 So, once again this post is longer than I intended, but never mind. Hope you all have a great day, take care, and thanks for dropping in to visit!
Posted by Valerie-Jael at 10:13