A pinch and a punch for the first of the month....

Morning everyone! As kids we always used this saying on the first of the month - anyone else remember it?

This afternoon I have to go to the dentist, which I am not looking forward to at all, so I hope it won't be as bad as I am imagining it to be!

As it's the first of the month it's time for my September journal pages. The kids here are going back to school now, so I have incorporated a blackboard into the first side. I painted some torchon watercolor paper with black acrylic paint and scratched some words into it while it was still wet, and then rubbed some white chalk into it, as all the blackboards at school were always scratched and rather battered. I wrote the *message* using a white wax crayon. I saw this quote recently on Sue's blog, and liked it so much I just had to put it onto my journal. Apart from that, the general theme is autumn, so I used orange, red, brown and green for my colors, lots of fallen leaves, some TH spiders' webs and some quotes about September and autumn. I made the colors paler on the second page, to try to give a misty look. I used straight lines, divided up into 2 blocks for the daily journalling, as I found this easier to use last month than the usual squares. It was fun to make, and I like using different techniques and colors each time. I will be linking my journal to the *Kathryn Wheel* journal challenge as soon as the link is ready! 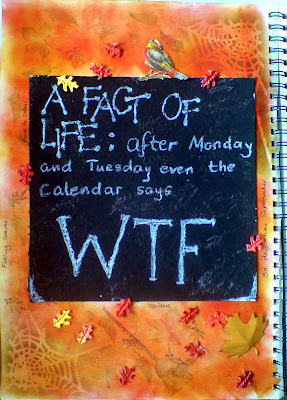 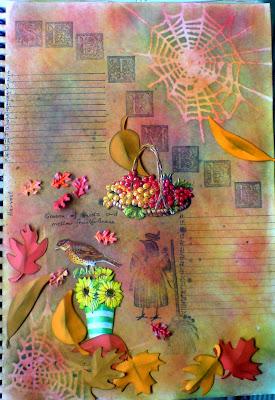 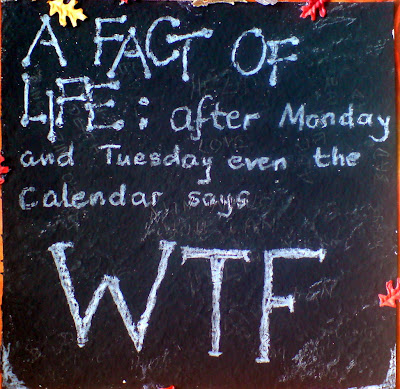 And while I was in an autumn frame of mind I made the September calendar page for a friend, who gets a page from me each month. 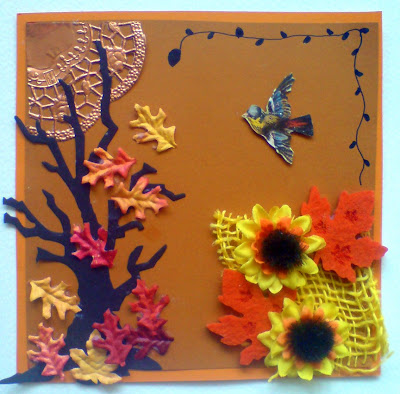 And here's another of Narda's jokes:

A couple lived near the ocean and used to walk the beach a lot. One summer they noticed a girl who was at the beach almost every day. She wasn't unusual, nor was the travel bag she carried, except for one thing; she would approach people who were sitting on the beach, glance around and then speak to them.

Generally, the people would respond negatively and she would wander off. But occasionally someone would nod and there would be a quick exchange of money and something that she carried in her bag.

The couple assumed that she was selling drugs and debated calling the cops, but since they didn't know for sure, they decided to just continue watching her.

After a couple of weeks the wife said, 'Honey, have you ever noticed that she only goes up to people with boom boxes and other electronic devices?' He hadn't and said so.

Then she said, 'Tomorrow I want you to get a towel and our big radio and go lie out on the beach. Then we can find out what she's really doing.'

Well, the plan went off without a hitch and the wife was almost hopping up and down with anticipation when she saw the girl talk to her husband and then leave... The man then walked up the beach and met his wife at the road.

'Well, is she selling drugs?' she asked excitedly. 'No, she's not,' he said, enjoying this probably more than he should have.

'Well, what is it then? What does she do?' his wife fairly shrieked.

The man grinned and said, 'She's a battery salesperson.'

'She Sells C Cells by the Seashore!'


So, that was it for today. Think of me this afternoon when I am at the dentist's, I need moral support! Have a good day, stay safe, and thanks for visiting!