Good morning evereybody. Today the sun is shining again, and I am happy to say I slept well, which helps enormously. Had another crafty day yesterday, while listeneing to the thunder rumbling, as it was a hot and sultry day, and the rain did cool things off a bit.
I made a mini book, 4x3", with covered chipboard covers, and it ended up completely different than I expected. I don't plan things through, just sort of take it as it flows, and yesterday it flowed in a different direction, but I think I like the results. Here it is, as a slide show, so that this post does not grow too long.


Then I have three tags that i made last week, but never got round to showing.
The first is made of cardboard, painted with acrylics, *bubbled* and then decorated with a beaded bird and some matching roses. 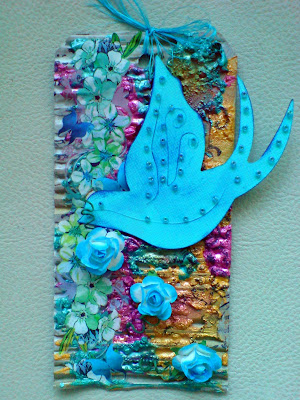 The second one has been made for *The cheerful Stamp pad*, where the challenge is a *Special occasion*, and this one has been made to attach to the present for a newly born baby girl, Lillith Devorah. I have once again used cardboard - one old box makes a lot of tags - covered with some backing paper from Dezina World, distressed, and then embellished with a vintage scrap picture, some prima fabric leaves, and some other bits and bobs. 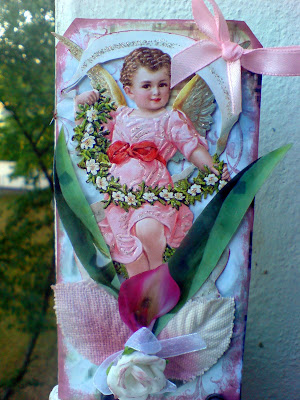 And as it's Monday, another little joke to finish:

NEW YORK -- A public school teacher was arrested
today at John F. Kennedy International Airport as he attempted
to board a flight while in possession of a ruler, a protractor,
a set square, a slide rule and a calculator.

At a morning press conference, the Attorney General said he believes the man is a member of the notorious Al-gebra movement.

He did not identify the man, who has been charged by the FBI with
carrying weapons of math instruction. 'Al-gebra is a problem for
us', the Attorney General said. 'They desire solutions by means
and extremes, and sometimes go off on tangents in search of
absolute values.'

They use secret code names like 'X' and
'Y' and refer to themselves as 'unknowns', but we have
determined that they belong to a common denominator of the axis
of medieval with coordinates in every country.

As the Greek philanderer Isosceles used to say, 'There are 3 sides to
every triangle'.

When asked to comment on the arrest,
The President said, 'If God had wanted us to have better
weapons of math instruction, he would have given us more fingers
and toes.'

White House aides told reporters they could
not recall a more intelligent or profound statement by a politician.

Have a nice day you all, take care, and thanks for visiting!
Posted by Valerie-Jael at 09:36