Hi everybody, hope you are all well and happy! Had another disturbed night here; first there were storms, with thunder and non-stop lightning, one flash after the other. Very impressive, but sometimes I need to sleep. Then at 2.30, just after I had finally drifted off, the telephone rang. I had a drunk at the other end, pleading with me to come down and let him in! *Shweeeetie, lemme in, I won't got drinking again!* I can well imagine why his sweetie didn't want to open the door to him, and told him to ring the right number. About a quarter of an hour later, he rang again, and begged to be let in....Being hard hearted, I told him where to get off to, and switched the phone off completely. I don't know whether he got let in somewhere, but I don't really care!
Yesterday I was out at my friend Inge's; we had our usual ladies day with eating, coffee drinking, gossiping and card playing, so it was an enjoyable time.
In the evening I managed 2 tags, one for Rebecca's *Blog Challenge Garden*, with *A* for adore, and the other one just because.... For the adore tag I made a double tag again, as I find the image looks lost on the larger tags I like, and a vintage scrap rose to match the silk rose. For the second tag I have used images from CI, and of course, my leopard.... 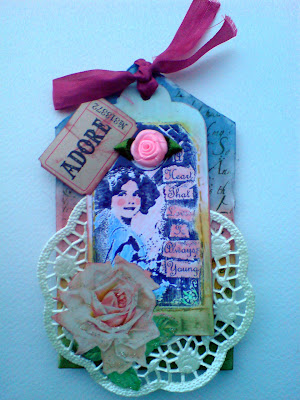 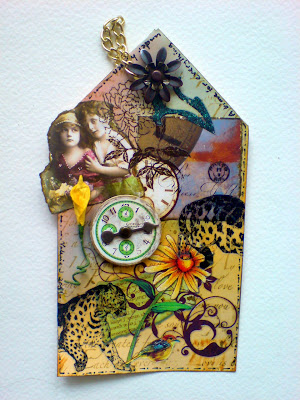 And here is the joke, from Narda:

1. My first job was working in an Orange Juice factory,
but I got canned. Couldn't concentrate.


2. Then I worked in the woods as a Lumberjack,
but just couldn't hack it, so they gave me the axe.


3. After that, I tried being a Tailor,
but wasn't suited for it -- mainly because it was a sew-sew job.


4. Next, I tried working in a Muffler Factory,
but that was too exhausting.


5. Then, tried being a Chef - figured it would add a little spice to my life,
but just didn't have the thyme.


6. Next, I attempted being a Deli Worker,
but any way I sliced it.... couldn't cut the mustard.

but eventually found I wasn't noteworthy.


8. I studied a long time to become a Doctor,
but didn't have any patience.


10. I became a Professional Fisherman,
but discovered I couldn't live on my net income.


11. Managed to get a good job working for a Pool Maintenance Company,
but the work was just too draining.


13. After many years of trying to find steady work,
I finally got a job as a Historian - until I realized there was no future in it.

14. My last job was working in Starbucks,
but had to quit because it was the same old grind.


AND I FOUND I'M PERFECT FOR THE JOB!

Okay, that was it for today. Have a great day and take care! Thanks for visiting!