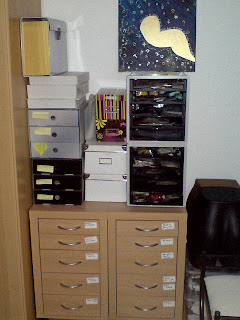 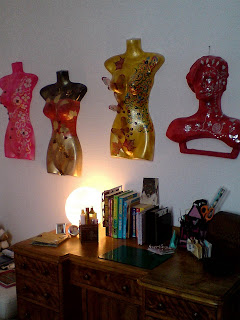 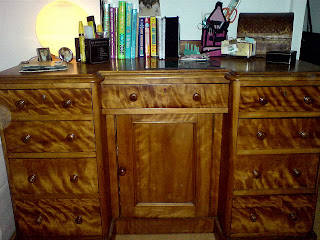 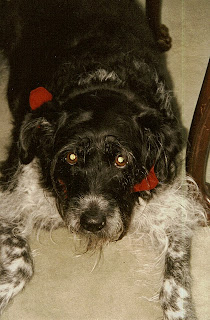 I DID IT!!!! I have managed to clear my desk. Thought I would need a bagger to get rid of all the rubble and archaeological remains which have heaped up on it since I last scrapped there. I pulled on my elbow-length rubber gloves, took an extra strong plastic bag in my left hand and started. Found lots of old friends hiding there. Some nice piccies of my last dog, Scruffy. The angel-wings which I bought to use on Xmas cards. Lots of buttons, brads, flowers, paper-clips, pieces of ribbon, Easter decorations (just in time!), 3 Labellos in different stages of going off, a dried out stamping pad, my camera which I have been looking for for at least half a year, embellishments galore, 3,70€ in small change, you name it, I found it. No, I did not put all those treasures into the bin-bag, but sorted them lovingly into the right boxes, which were, strangely enough, mostly empty. And I found 3 (yes, THREE) spiders, probably relations of Freddie and Frieda. One was already dessicating, the other two got flattened ready for the journey to the big web-in-the-sky for the re-union with their family and friends up there. Then I cleaned the floor. I got out my steam broom and steamed the floor hygienically clean, which was necessary after I had removed so many families of dust-bunnies. The floor now has the same pleasant beech-wood tone as the living room, I think I had forgotten that. The desk has been moved to a space near the door, where it is nicer to sit, but I will have to keep it tidy....and the storage units have been hidden in the corner next to the wardrobe, where the desk was before. Anyone casually going past the bedroom on the way to the bathroom will not be able to see into this corner which makes it predestinated for a good stash hideaway. And there was even enough space for my spare bums in the corner! I still have to sort and tidy some of the drawers in the storage units, but I think I have done enough for the time being. I wish you all a good start to the week, and hope that the weather will soon give us a break. But bad weather is at least wonderful for clearing up and scrapping.
Posted by Valerie-Jael at 16:11