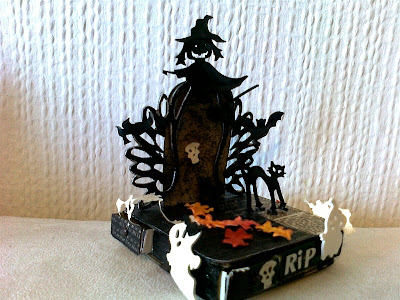 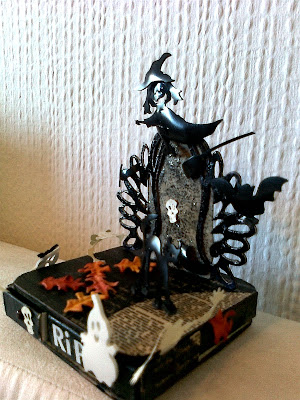 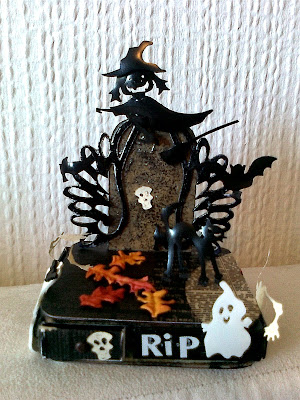 I liked the sound of this challenge because it gave me the opportunity to play. As base of the *gruft* I used 4 matchboxes as *graves*, sandwiched betwen two beer-mats. The top mat has been covered with a scrap of *Graphics 45* paper. The sides of the matchboxes have been painted with black acrylic paint pimped up with some black soot stickles. The *drawer-ends* of the matchboxes have been covered with more paper scraps and have an added brad as knob. The *grave* at the back is a trimmed IKEA tag, which has been distressed with black soot ink and stickles. I added chipboard wings, distressed again with soot black and black embossed. The witch, hat, broom, cat, ghosts, shoes and bats have been die cut from black or white shrink plastic. Finished it off with a few skeleton parts trying to get into ( or out of?) the drawers. Was great fun to make, playing is not only for kids. There's a nice saying which says *You don't stop playing because you're old, you get old when you stop playing!* So, let's stay young!