A Winter Walk through Kaiserswerth 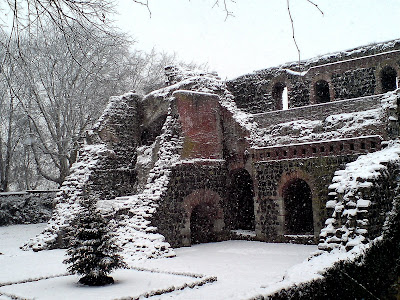 Woke up this morning to a white, white world again. It always looks really pretty outside, I have a beautiful view over snowy fields and trees from my window, but don't usually like going out in it. Anyway, today I needed to go to the bank, and as I didn't feel like exhumating my car from under piles of snow, I decided to dress up warmly and walk. It's about half an hour to Lohausen, where the bank is, I walked along the road, as it's the shortest way. Then I decided to cut down to the Rhine and take the *Scenic Route* on the way home. There was just a light snowfall, and it was good to be out in the (very) fresh air. Walked along the Rhine, but never met anyone else today, nobody else crazy enough to go there in this weather! At the *Old Rhine Ferry* I stopped for a coffee to warm up, and then discovered that I had my little mobile camera in my pocket, and was able to take some pics after that. From there I walked further, past the ruins of the *Imperial Castle* of Emperor Barbarossa, through the ancient Church Close, and then down the main street, where there are a lot of old houses, some of which were seasonally decorated. By this time it was snowing quite hard, and as I got to the top of the street, it had turned into a little blizzard.
But fate was on my side! Just at that moment, I noticed that I was standing next to the Grill Take-away, where they make such delicious chickens and chips and....
So, what is a girl to do under those circumstances? - Clear thing - open the door and go in! The shop is run by a very friendly Greek family, with a sunny temperament whatever the weather, so after being warmly welcomed I sat down, ordered half a chicken, chips and a diet coke. I think the diet coke is important. After all, the meal had more than enough calories - but it was sooooooooooo delicious! I hadn't had any breakfast, apart from my usual 3 cups of coffee, so was really hungry and enjoyed it no end. The lady sitting at the next table was very chatty, so we talked about this and that while eating and strengthened ourselves before going out into the blizzard again. I felt really full and warm and well by the time I had finished and was ready to stagger on home. The last 20 minutes back home was a bit unpleasant, because the wind was blowing the snow into my face, and my glasses were so snowed up that my vision was rather impaired....Or was it because of the glass of *Ouzo* that I got before I left the grill??
Well, if I hadn't got back safely, I wouldn't be writing this, found my way back like a homing pigeon, but probably not quite as quickly.
Thanks for stopping by, and enjoy the pictures!