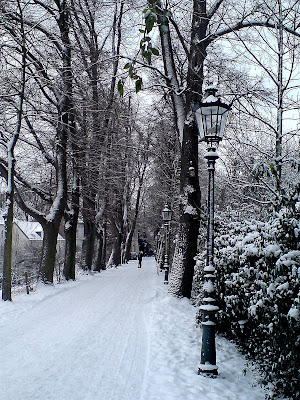 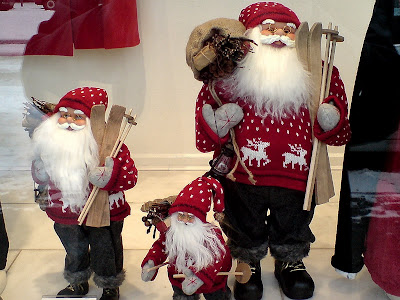 I grew up with *The Chronicles of Narnia* from C.S.Lewis, and that magical land, where it was always winter and never Christmas, was something that impressed me very much. I used to have an old wooden wardrobe in my bedroom, too, but it had no magic door to another dimension. Snow was something we did not have much of in London, I have more memories of fog and rain, while snow was something on old fashioned Christmas cards.
I have been living in Germany since 1972, and up till now we never had a *white Christmas*, and to be quite honest, I never wanted one. The only one in the family who liked snow was my dog.
It's still a few days to go, but as we have had snow for a couple of weeks now, it looks as though the wishes in Irving Berlin's *White Christmas* song - made immortal by Bing Crosby - will be coming true for a lot of people this year.
Today it was extremely cold. I watched the sun rising, and the crows sitting in the tree waiting for me to disappear so that they could get to their *supplies* on my balcony. Later it snowed again, but it was still possible to go out for a walk along the Rhine and through our little town. Two joggers passed me on the Rhine-path, one wearing shorts and with naked feet! Well, it takes all sorts to make the world....Unfortunately I was not able to get my camera out quickly enough to get a pic of him.
The old fashioned lanterns along the path, and the snowy trees, reminded me of *Lantern Waste*, but I saw neither Lucy nor Mr Tumnus.
I did see some nice Christmas decorations again, and Santas climbing up several houses. And a snow-ball bush. And kids throwing snow-balls or being pulled along on sledges by their Mums and Dads. And had time to admire the beautiful windows and entrance to St Swidbert's Church, and the arch leading to the *Marien-Hospital*.
And after I had warmed up again at home, I watched the sun putting sparkles on the snow before setting in the west, and a few minutes later the moon rising through the trees.
Am I getting to actually like snow??
Have a nice weekend, take care, and thanks for looking in!