The Bishop and the students 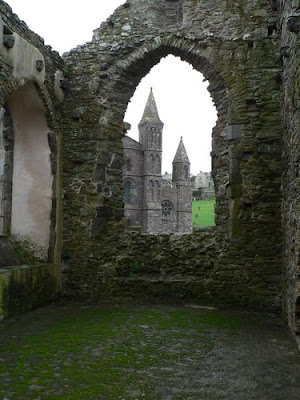 In the list of 100 things which I saw on Tracy's Blog and copied off SusieJ's blog, who copied it off Donna's blog, who got it off her daughter's blog who..........I mentioned that I once hitched a lift with a bishop. I had been studying Theology and Psychology for about 3 months, it was round about Christmas time and I was invited by a fellow student to go home with her to Durham over the holidays. I was thrilled, as I didn't fancy the idea of staying on in college over the hols, but neither of us had more than a few shillings....not enough to buy a train or even a coach ticket.
So we decided to hitch-hike. We were both scared stiff, even back in the 60's we had heard lots of hair-raising stories of what might happen to girls who did such risky things. We packed our bags and took the bus to the edge of town, and at first rather shyly, we put up our thumbs. We were hoping to get a lift quickly, as it was cold, and we had a long journey in front of us. A few dubious looking cars and lorries drove slowly past us, but didn't stop. Then a Bentley drove by, stopped, and reversed. An elderly lady was sitting next to the driver. Both were well dressed and groomed. The lady said, " My husband and I don't approve at all of young ladies - she meant us!- hitch-hiking, but we don't want to leave you standing here, either. Put your bags in the boot and get in!" We couldn't believe our luck, and scrambled onto the very comfy back seat. We introduced ourselves, and started chatting to one another. They asked us what we were studying, and asked a lot of interested questions. We were proud to have a chance to show off our theological and psychological knowledge, and tried to impress them with lots of important sounding phrases. At mid-day, they stopped in front of a beautiful country pub, and said they wanted to have a spot of lunch, and asked if we wanted to accompany them. Red-faced, we had to admit, that we didn't have enough money, and they told us that we were their guests and they would be honoured to invite us. We all had a lovely lunch, and were soon chatting as if we had known each other for ever. They told us that they were visiting relations north of York, but that they could take us that far, which was a good part of the way for us. At York, the man got out and said he had to "disappear" for a moment and went into the station. We thought he needed the loo. After he returned, he said they would have to leave us there, but he would give us his address in case we were ever in his neighbourhood. He took out our bags, gave us an envelope and drove off, waving and smiling at us. In the envelope were 2 return train tickets to Durham, and his card, with his name and occupation - he was the Anglican Bishop of N. He and his wife must have amused themselves heartily over our naive theological tales. They were elderly then, and must have long since died. I hope they are enjoying their well-deserved place in heaven, and I will never forget what they did for us in that cold December more than 40 years ago.
Posted by Valerie-Jael at 22:40